Because he didn’t want to be a Chicken….No?

Goal: One night in London to swap out dirty cold clothes for new summer clothes and bikinis, because we were Turkey bound!

I had mixed feelings about going to Turkey. It wasn’t that I was worried, or nervous, however it seemed in some small sense wrong to be enjoying the absolutely incredible sights of this beautiful country while just hundreds of kilometers away thousands of Syrians are living in absolute hell and countless more are flooding the Turkish border desperately seeking reprieve from the abhorrent civil war. Literally fleeing for their life. To escape Hell on Earth. It seem’s somehow unfair for us to sit as privileged westerners so close to country literally at breaking point. And so my time in Turkey made me overwhelmingly grateful and made me fully appreciate just how fortunate I am and how this isn’t the case for so many millions.

We said goodbye to Dan and took off on a girls trip, landing first in Cappadocia, the town that seems as if It’s been plucked out of some mythical land and placed in the Middle of Turkey. It’s like another planet/Sci-fi film/Grand-Canyon-but-not-quite. It’s built as a result of volcanic eruptions many moons ago which formed this weird Luna City, which years of rain and wind have carved into cliffs and sinuous valleys and magical fairy chimneys and a warren of underground caves. If Iceland was a bizarre Nation then Cappadocia wins the prize for the most surreal landscape.

Almost every hotel and church is inside an underground cave or Fairy Chimney (fun fact these look like giant penises. Very Phallic) at some capacity and it makes you feel like you’re staying in some kind of themed hotel rather than a naturally eroded city. Apart from the vivid landscape, Cappadocia had so much to offer! …Including amazing food.. I’ve never eaten so many Olives, Tzatziki and Feta in my life, as well as some traditional dishes, like breaking your own clay pot to get meaty stew goodness inside!

If you look at any travellers bucket list you will invariably find the reason so many tourist flock to Cappadocia… Hot Air Balloon Rides. And so we rose at 4am to make the trip to our Balloon, pile in, and set off into the air with a hundred other balloons in the dark of night, listening to nothing but the sound of the flames propelling us upwards, riding in time with the sun over the Goreme Valley. The next hour is one I don’t think I can even find the words to describe. It was, hands down, the most magical, inspiring, divine experience of my travelling life thus far. the landscape from the ground is stunning enough, but soaring over it from above, peering into pigeon holes, bumping into rock formations and seeing the valley bathed in fresh morning light is something I will truly never forget. After we execute an On-Point landing, we’re greeted with bottles of Champagne (Because FANCY at 7am) and chocolate covered strawberries. What a seduction. Take note, men of the world. If ever you need to propose to a woman, you have a fail-safe option here. What woman in her right mind can say no to sunrise hot air balloons, followed by Champagne and chocolate strawberries? Answer: None that I know.

Our last day in Cappadocia took us exploring the underground cities. There are many of these underground caves originally used to hide from the harsh winters and store food, but then used by Christians to escape the persecution of the Romans. Some of these are up to 8 floors deep, filled with tiny, narrow corridors and staircases. N.B Must be small. Do not become the severely overweight American woman who had given up and sat on the floor of level four covered in sweat. It’s quite claustrophobic but insanely interesting, with some incredible architecture for the time!

We jumped onto an overnight bus (Man I thought I left these behind in South America!) and headed south to board our Sailing boat for a week of Mediterranean bliss. Enter 7 days (and a few overboard vomits) of sailing along the Turkish coastline, basking in the sun of the yacht, paddle boarding and being towed behind the boat. Catching our own fish for dinner, drinking loads of Turkish wine and seafood and generally being a lizard. This was one of the most amazing weeks of my travels. We had an epic crew, an amazing skipper and it made for an incredible week sailing.

Our last stop on our Turkish getaway was of course Istanbul. and FAR OUT I LOVE THIS CITY! Istanbul is steeped in culture and beauty and is an incredibly vibrant mash up of the old and the new, east and west, tradition and trend, all wrapped up in the chorus of daily prayer and Turkish Hospitality- (YAS imagine my DELIGHT when I realise there is turkish delight given to you everywhere!!!)  Some parts of Istanbul feel seriously old world while others feel completely European. And I suppose thats pretty accurate for a city that boasts a bridge that literally connects Europe to Asia. Upon Arriving late at night, in what we were told was an excellent part of the city to stay, we were affronted with a transvestite bar next door, complete with sidewalkers, in an almost deserted alleyway (apart from the Transvestites) with a pack of scary looking youths lurking in the trash filled shadows. We hurridly scampered into our hotel and locked the doors, vowing to change hotels in the morning. However,  unlike drunk texts to ex-boyfriends and and confessions of love, everything looked much better in the light of day and we decided to stay. Despite our new neighbours we were in fact in an incredible part of the city that took us up to Taksim square, the heart of modern Istanbul. Although there had been a few protests and demonstration lately, we had absolutely no problems and found Istanbul and the square to be a very friendly, bustling, alive place.

With only a few days to explore, we set of to be mega tourists-ticking off the Insanely beautiful Blue Mosque, Ayasofya and the sensory overload of The grand Bazaar, where the four of us went into frenzy mode, completely overwhelmed and enamoured by the bold colours, smells and sights to behold! We may or may not have spent 50 dollars on gourmet turkish delight. I’m not at liberty to confirm or deny these accusations…. But it would be alright if I did, okay?

Of course, we couldn’t go home without experiencing a traditional Turkish Bath! And so we headed to the oldest Bath in Istanbul, between the Blue Mosque and the Ayasofya, to be stripped naked and washed and scrubbed down by a little Turkish woman. I’ve never felt so clean or refreshed in all my life. Those Turkish women know how to wash a girl down, thats for sure. They get all up in there. It was sad to say goodbye to Istanbul, with its bustling streets and amazing culture, but we weren’t heading home just yet! There was one more stop to be had…. Munich, for Oktoberfest with the Port Macquarie X-Ray Department! We donned our Lederhosen and joined the thousand of Locals and foreigners who flock in hoard into the festival grounds, eat German sausage (you literally can’t say this without sounding gross. I did it, I ate the German sausage) drinking German Beer and singing along to German drinking songs whose lyrics totally evade you but whose spirit propels you onto the table tops!

And so after a month in Edinburgh, and 3 weeks galavanting around Europe… our livers needed a break and we farewelled our friends and heading back to Scotland and Back to work. I write this from my room in Ayr, on the coast of Scotland, where I’ll be for the next few weeks before heading home to Glasgow.

And Life is all kinds of amazing. Happy at an all time high. Peace out! 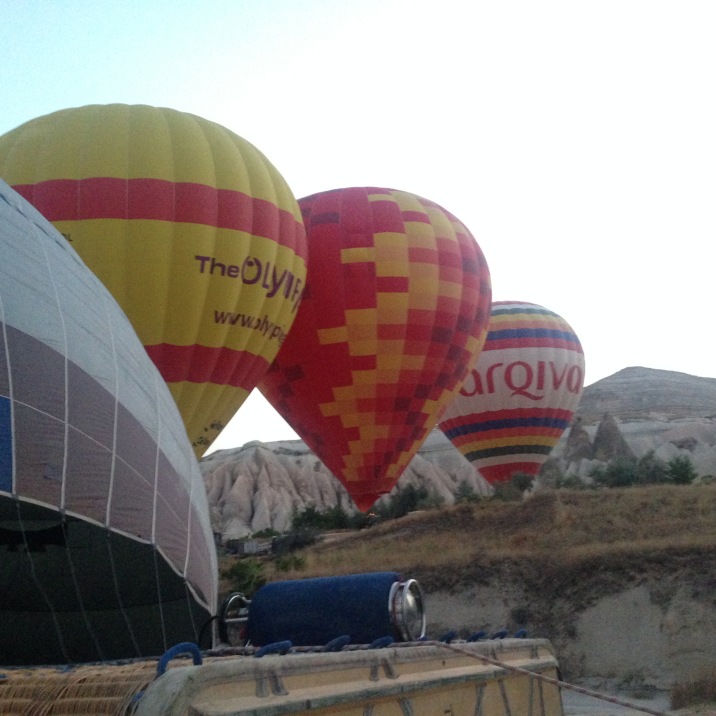 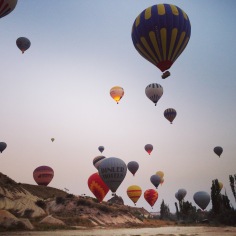 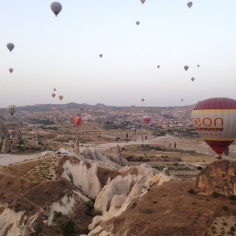 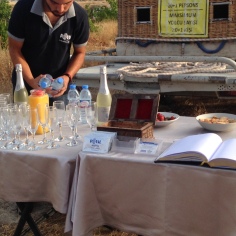 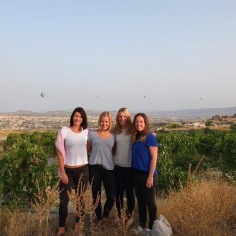 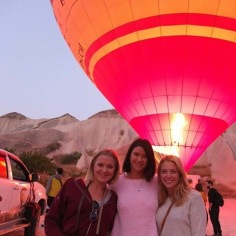 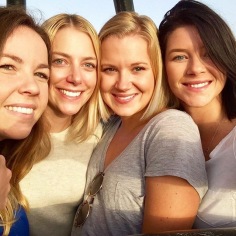 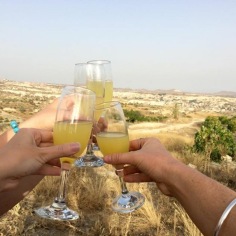 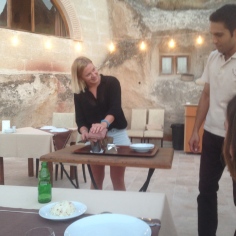 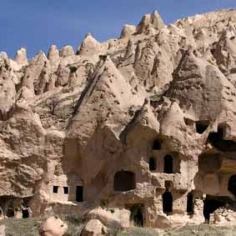 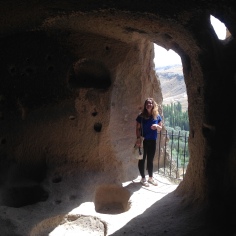 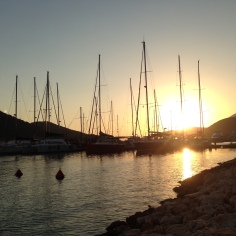 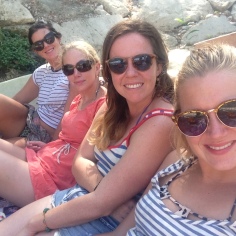 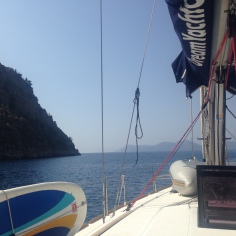 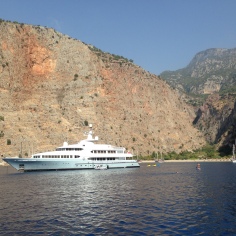 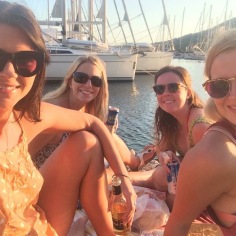 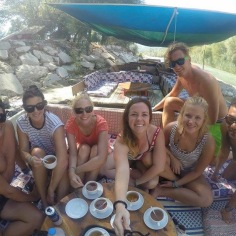 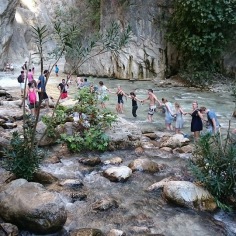 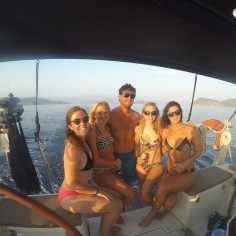 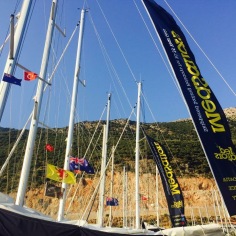 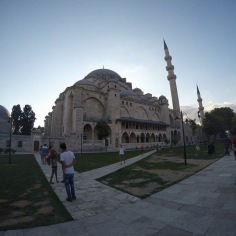 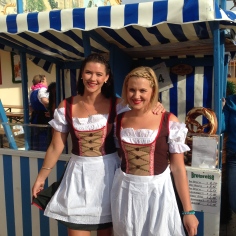 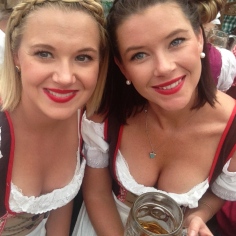