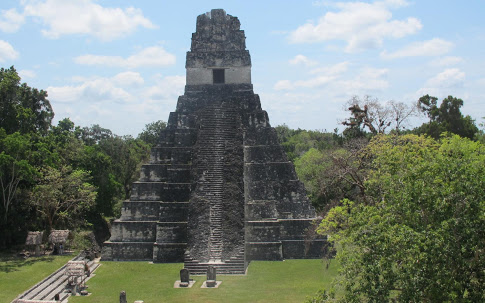 Ditzy American girl to German Gabriel: Oh I’ve been to Germany, I love Germany! Where are you from?

And so begins our trip to Semuc Champey, a collection of natural, aqua pools and a stunning limestone bridge of unmatched beauty. Picture you’re in the lush Guatemalan jungle. Then picture the clearest water possible, imagine the brightest shade of turquoise you can and then imagine its ringed in limestone cascading pools and you’ve got Semuc Champey. A thirty minute ride from the nearby town of Lanquin, we jump into the back of a cattle truck for the bumpy ride through the jungle to the pools.

As we’d not expected our trip to Semuc to happen that day and having arrived late the night before to our cockroach ridden hostel (I’m trying to forget the feeling of waking up to a cockroach on my face) we didn’t really have any time to do any mental preparation for the day and this proved quite advantageous- we we’re in for a surprise of epic proportions. We had no idea we’d be caving. When our guide told us to strip down and grab a candle, we figured we’d wade through a bit of water and see a cave, then head out. What we didn’t expect was a 2 hour trip 1km through a winding rabbit warren of pitch dark caves and rushing water. So we strip into our bikini, chuck on some runners, grab a candle each and follow Juan into the icy, pitch depths of the cave. Ten minutes in and the water is above our heads as we awkwardly swim one handed (candle laden arm precariously trying to stay above water lest it throw us into perpetual darkness) We climb cliff walls, ascend ladders beneath waterfalls that are secured using simply a shittonne of duct tape (OH and S does not exist in Guatemala) and some of the brave plunge 5 meters into a narrow plunge pool. Now i’m usually the first to throw myself of a cliff into a body of water of any kind, but I’m not too keen on clambering up a cliff wall and throwing myself into an insanely narrow pool that I can’t see the bottom or dimensions of in the pitch dark. No Thanks. After a pretty special few hours and a lot of wet candle wicks in the cave-warren, we head out to go tubing down the river. But first, swing time. There’s a giant rope swing that catapults you into the middle of the rushing river (people are scared of this but plunge into dark cave pools?) then we grab our tyres and a beer and float down the river. Actually not that relaxing because it’s so bloody teeth-chatteringly cold.

By this point we’re all pretty keen to see the pools, so we take off on the half hour stair hike to the top viewing platform and holy moly we were gobsmacked. It’s the all encompassing view of the Limestone shelf and contrasting colour of the green jungle and aqua water that flows over the shelves that leaves you all kinds of breathless. A quick hike down the other side brings you to the actual pools and after the sweat soaked climb we took much pleasure in jumping into the cool, aqua pools. Theres many natural slides and mini cliff jumps from pool to pool, you can basically start near the top and make your way down the cascade of pools. It’s essentially a natural water park in the absolute middle of nowhere. Insane fun. Top it off with a mini underwater cave where theres only a few centimetres between the water and the roof for you to lean you head back and keep only your lips above water. Been there, done that, got mildly claustrophobic.

Last stop is the bridge jump…12 Meters above the river is a bridge made of slats of timber laid atop one another and proves a pretty scary leap into the icy river flowing below. We redeemed ourselves for skipping the cave jump by launching ourselves off amongst a torrent of excited squeals in what turned out to be the perfect end to an already magical kind of day.

As I mentioned earlier, Semuc Champey is literally in the middle of nowhere and tourists flock solely for the pools and so we packed our gear (leaving the cockroaches behind)  and headed north to Flores, a beaut of a little island town in the middle of a lake. After 14 hours on board a mum-van (2 for demonstrations, 3 for the world slowest ferry that takes on van at a time for a 20 minute round cross.  And so we sat in the gutter by the ferry in 40 degree heat and a horde of wild pigs to keep us company until it was finally our turn and off we headed to Flores. There’s not much to do in Flores itself, the island is just a collection of little cobbled streets, a lovely historic church and a Spanish plaza, ringed by lakeside restaurants. It’s used as a takeoff point to visit the Ancient Mayan ruins of Tikal-probably the most impressive Ancient City I’ve seen after the over-tourised Chichen Itza (yep, calling it. Ruins themselves are way more imposing that Macchu Picchu.)

We opted for a sunrise tour, so up we got at the delightful time of 2am. That’s not early morning. That’s middle of the night. Who’s idea was this again? We arrive in the Park at 4:30 and begin the hike through the city to Temple IV, built in 740AD (proper old) and one of the biggest pyramids in the Mayan world at 64meters. Oh, I forgot to tell the story of how Brit kicked a metal bed and broke two toes and her entire foot was black and blue. So on we hobble, at the back of the pack, in the pitch dark through the Guatemalan Jungle. We began to slow and lose our gang, the Howler monkey are screeching like Velociraptors and there’s the actual fear of being eaten by a Jaguar (Hey! It could happen..) or stepping on a Scorpion. I tried to be a good sister and tap into my Crossfit training and partner carry her…. turns out thats rather difficult in the dark, tripping over roots and when your partner’s put on a good 6kgs and is carrying a 5k backpack and you’re breathing like a beached whale. I got about 50 meters and we made up some good ground when we had to abort mission or run the risk of me having my first panic attack since the meltdown in the corner of a train to Monaco. We finally catch up to our group and begin the climb in the dark to the top of Temple IV. There’s something pretty awe inspiring about climbing an Ancient Temple in the dark as the Howler monkeys reign supreme, making you feel like you’re in a scene out of Jurassic Park. We reached the top at sunrise to watch the light filter through the jungle and see the foggy morning clear to reveal three other temples in the distance, towering over the Jungle Canopy. The rest of the morning was exploring the Ancient City, before hordes of tourists descended. Brit, the little trooper, hobbled along all day with a broken foot to alllllmost no complaining-there was no way she was missing out!

We even held the obligatory giant Jungle Tarantula (Spew)

With only a few weeks left of Part 1 of our adventure around the world, and our tans well and trull faded, we made the executive decision to head further north into Belize and chill out with the Rastas.

Brace yourselves, The “Unbelizable” Puns are coming. 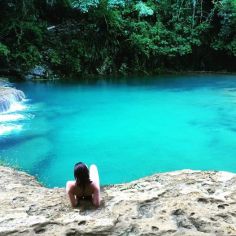 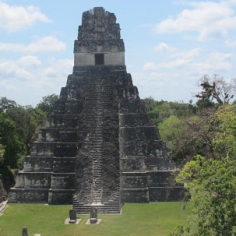 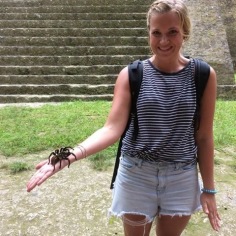 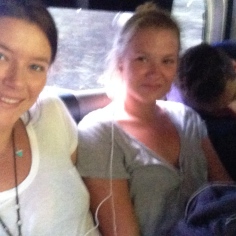 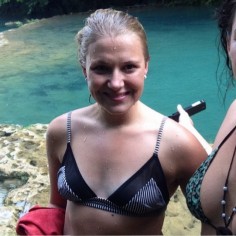 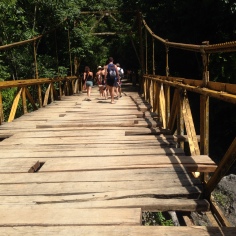 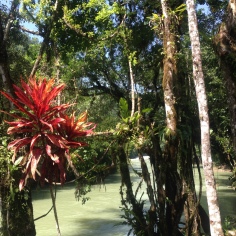 2 thoughts on “Guat’s up Guatemala!”