So in hindsight I was concussed. After a flight that involved me mixing up my words and generally being rather confused and out of it (at one point Brit asked if I was stroking out)  we touched down in energetic Buenos Aires. We were met by our private driver (perks of befriending an Argentinian who manages a hotel) and took a drive through the beautiful city to our Hostel in San Telmo, the oldest neighbourhood of Buenos Aires..a rabbit warren of cobbled streets, charming old buildings and artwork and street culture in excess.

We ticked off the touristy things like visiting La Boca to watch some Tango, wandering around Cementario Recoletta (walking around a cemetery is kind of a morbid practice, no?) and gorging on Argentinian Steak. It’s quite clear to see why people refer to BA as The Paris of Latin America. It’s a city steeped in grandeur with an elaborate and rich cultural history and aesthetically it’s beautiful. It’s quite easy to be walking down the street and swear blind you were in Europe. Rather than being a city centres around one monument or centre, it’s a myriad of different neighbourhoods, each with it’s own unique style, feel and colour! Because BA is indeed full of colour…and wine…and chocolate….and music! And long lunches that turn into long afternoons and long evenings. Muy Bueno!

We stumbled onto a really adorable street festival which seemed to be an amalgamation of German-Celtic-Pagan-Medieval-Irish dancing-Sword wielding Pirates and Scots in full highland dress, complete with toy trolls, voodoo dolls, a Nana’s homemade bake sale, a unicorn based bookstore and an assortment of Game of Thrones paraphernalia. I still can’t discern what was really going on, but we danced, ate some German sausage (like, actual sausage) and a bag full of homemade chocolates and fudge.

Though for all Buenos Aires’ excitement and cultural beauty, I’m going to say what very few do. We didn’t LOVE it. You know the feeling, when you instantly fall in love with a city, or you spend a few days getting your bearings and you start to find your groove…. It just didn’t happen. The culture often feels artificial, theres a LOT of male street harassment and being country girls, we felt very claustrophobic. We spent our time longing for open spaces and being able to see more than the single street in front of us. Thats not to say we didn’t have fun. We’d been looking forward to learning more Spanish than just “where is the bathroom” “Dulche de leche” “meat and chicken”  a few niceties and also looking forward to some home cooked meals… And so finally there was language school! Oh wait, no there wasn’t. Call it what you will, we were robbed, or scammed, or whatever you want to call it. Maybe this influenced our experience? We arrived at school to find out that our ‘teacher’ and part owner of the business had arrived under the cover of darkness like a good and proper criminal, cleaned out bank accounts (Ten grand worth!) packed up the office and loaded it into a truck and run away to Canada, never to return. The dude even took the coffee maker. What kind of heathen denies us caffeine? But Alas, I digress….. Long story short: There IS no school to learn in, there IS no home stay with the cute Argentinian Nana who was going to feed us and now we’re nearly 600 dollars out of pocket and still can’t order meal without pointing, smiling and saying “uno per favor” To say were mad/disappointed/language-ally challenged would be an understatement! Now I’m in a filthy dispute trying to get our money back.

So in a fit of “we’re mad at you for cheating us Buenos Aires,” having run out of USD (and as such paying the real conversion rate and slowly dying watching our bank balance decline) and having nowhere to rest our weary heads, we decided to jump on a ferry and head to Uruaguy. BAD IDEA!

Just kidding, Uruguay is awesome. The ferry crossing was not. I’ve had some pretty horrible ferry crossings in my time. There was the time in Greece, where Brit and I spent 5 hours in the Fetal position on the floor of a public toilet. Then there was Belize, where I threw up in my hand. Followed closely by Indo, where we donned life jackets and genuinely feared for our lives in a storm we shouldn’t be crossing in. But I think Uruaguy just might top them all. Will sell a limb not to have to get on another bloody ferry back to Argentina. Spending two hours throwing up into little bags because the toilets were occupied, in a full aisle of a ferry, ghostly white and drenched in sweat, was an experience we’ll gladly never experience. Actually, we probably will. Tomorrow. Trying not to think about it.

And currently regretting the bag full of chocolate fudge we stuffed ourselves with at the whats-is-name street festival now. Fudge will never taste the same. 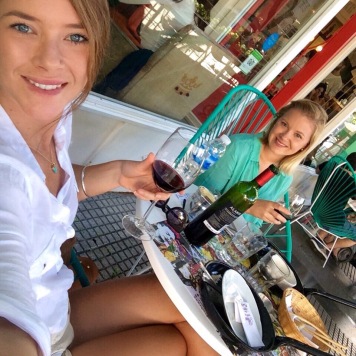 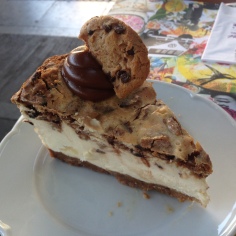 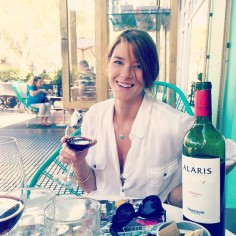 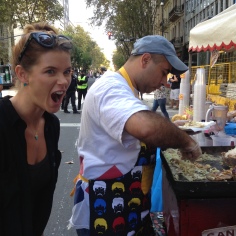 Get in my BELLY

German sandwich man. I love him. 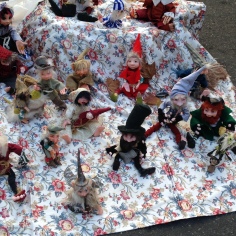 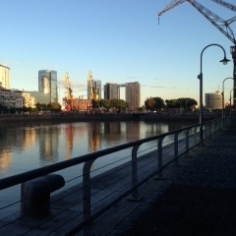 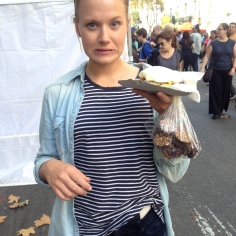 2 thoughts on “Buenos Aires…see you later, but probably not”