Fresh off our 30+ hour journey to Argentina, Brit and I check into our hostel originally named “The Hostel Inn.” This place is more of a resort than a hostel-with a gigantic pool complete with volleyball net and pool bar. It’s a far cry from our pokey hostels to date so we’ve been taking full advantage of paradise by laying in the sun drinking wine and eating empanadas.

We still can’t speak much Spanish, so we enlisted the help of two spanish speaking Israelis (who happened to be staying at our hostel) to help us change some money. Argentina can be RIDICULOUSLY cheap if you follow a few tips. Due to Argentina’s high inflation rate, there is gross uncertainty and distrust in the stability of the Argentinian peso, Everyone is looking to exchange their pesos into something more secure, like the USD. The Argentinian Government has essentially put a ban on purchasing USD to inspire confidence in the Peso, so a parallel “Black Market” of currency exchange has emerged. It’s called the Blue Dolar (spoiler: it’s not ACTUALLY blue, to my dismay) and it see’s you get many more pennies in your pocket. Yes, it’s Illegal, but it’s very much in the open. The best way is to take to the streets or “cambios” and exchange your US dollars for a shit tonne of Pesos. For example, 1USD gets you about 7-8 Pesos on the official rate, but on the Blue market you’ll get between 11-13 (depending on the day) … so essentially we can almost double our money (More dulche du leche mmm ) Now you can imagine Brit and I attempting to hit downtown Cambios with our zero Spanish and negotiating skills (Thats a rip off waiting to happen) :enter Israelis. We tagged along while they negotiated a sweet price with a local in Iguasu and off we went to gorge ourselves on Argentinian steak and wine. It’s been so nice to eat and drink well In Argentina after eating fruit and Peanut Butter sandwiches in Brazil!

Now for the good stuff-the reason thousands of people spend hours and hundreds of dollars to  go to the middle of nowhere in Argentina- Iguasu Falls! You see pictures, people tell you it’s stunning, but nothing can really prepare you for the imposing magnitude of Iguasu falls. We jumped on a boat, adorned in our plastic poncho (That would quickly prove futile) and headed up the rapids to Tres Mosqueteros Fall, where you can see the falls of both the Argentine and Brazilian sides crowned by the view of the Garganta del Diablo (Devil’s Throat!). Then comes the most exciting part- we come face to face with the incomparable San Martín waterfall, the second in dimension and the hugest any boat may face. You can’t hear anything except the roar of the falls and the blood rushing between your ears as you take a speed boat underneath the falls-getting completely drenched and full of smiles. We were on a high all day!  The only downside of Iguasu is the COITE INVASION! These raccoon-anteater like creatures are horrible and can be quite aggressive-we thought they were cute for a good five minutes before they descended in a pack like flesh eating zombies, attacked us at a restaurant, ate our food, and chased Brit into a nearly cafe trying to climb her leg and eat her cookie. They are some serious pests!
Afterwards the four of us hit a cool Mexican place complete with free tequila shots and it’s own techno inspired disco.

We had one more day in Iguasu, and after seeing the falls for the day there’s not much else to do-so we spent the day by the pool and took a visit to a local Bird sanctuary where all sorts of birds and animals are rescued, treated, rehabilitated and released back into the wild. That night we took the bus to the 3 Frontiers- where Argentina, Paraguay and Brazil meet over the river for cheese and biscuits at sunset…they have a grand time the old chums… Then It was time to move on and we had an early start-5.30am to catch a flight to Buenos Aires and thats when the first casualty of our trip occurred.

In the pitch dark, my head had a painful and unfortunate meeting with a wall mounted fire extinguisher that resulted in a broken extinguisher and a broken scalp. A quick hand to the head I was met with quite the gash and a handful of blood. Not to worry, luckily Brit and I came armed with hospital grade disinfectant, saline and Steri strips (Thanks PMBH :|) My hair is now a mix of matted bloodied blonde birds-nest and steri strips taped precariously to hair… don’t know how effective it will be but I have faith in Brits doctoring!

The pounding headache has been quashed by lots of wine and ice-cream. Best medicine yet. 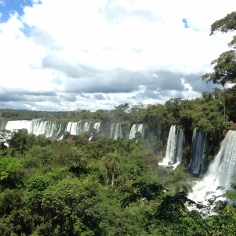 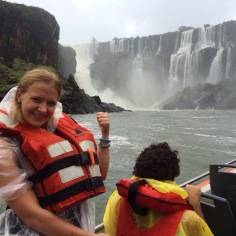 The poncho makes it

Soaking wet and full of smiles 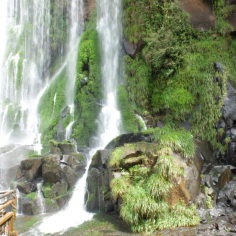 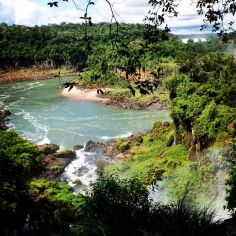 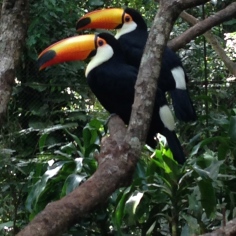 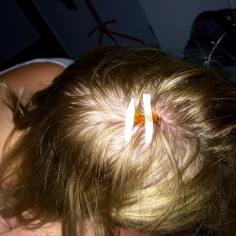 2 thoughts on “Falling for Iguasu”